We are still in the proccess of updating our supplies and animals on the site. If you have any questions please contact us! 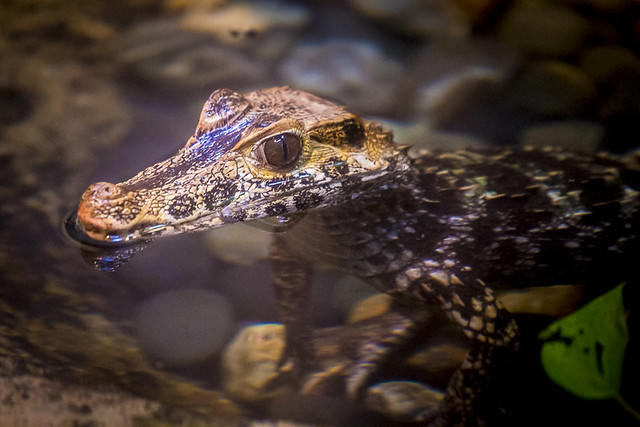 The Smooth-Fronted Caiman (Paleosuchus trigonatus) is a species of crocodilian found in South America. It is one of the smallest members of the alligator family, and can reach up to 1.5 meters in length. The Smooth-Fronted Caiman has a wide range of habitats, from slow moving rivers and streams to swamps and marshes. They are also found in flooded forests, lagoons, and even mangrove swamps. The Smooth-Fronted Caiman has a unique appearance that sets it apart from other crocodilians. Its body is covered with small scales that are arranged in rows along its back and sides. Its head is relatively flat compared to other caimans, giving it its name “Smooth-Fronted”. The coloration of this species ranges from light gray to dark brown or black depending on the environment they inhabit. This species feeds mainly on fish, amphibians, reptiles, birds, mammals and invertebrates such as insects and crustaceans. They will also scavenge for carrion when available. The Smooth-Fronted Caiman hunts by waiting patiently at the water's edge until prey comes close enough for them. They will then lunge forward and grab their prey with their powerful jaws. The Smooth-Fronted Caiman is an important species in its native habitat, as it helps to keep the local ecosystem in balance by controlling populations of other animals. It also plays a role in seed dispersal, as they often swallow fruits and nuts whole which are later deposited elsewhere when they defecate. Unfortunately, this species is threatened by habitat destruction due to human activities such as logging and agriculture. In addition, they are hunted for their skin which is used to make leather goods such as shoes and bags. As a result of these threats, the Smooth-Fronted Caiman has been listed as Vulnerable on the IUCN Red List of Threatened Species since 1996. In order to protect this species from further decline, conservation efforts must be put into place. This includes protecting existing habitats from destruction or degradation, creating new protected areas for them to inhabit, and enforcing laws that prohibit hunting or trading of this species. Education programs should also be implemented in order to raise awareness about the importance of conserving this species and its habitat. The Smooth-Fronted Caiman is an amazing animal that deserves our protection.